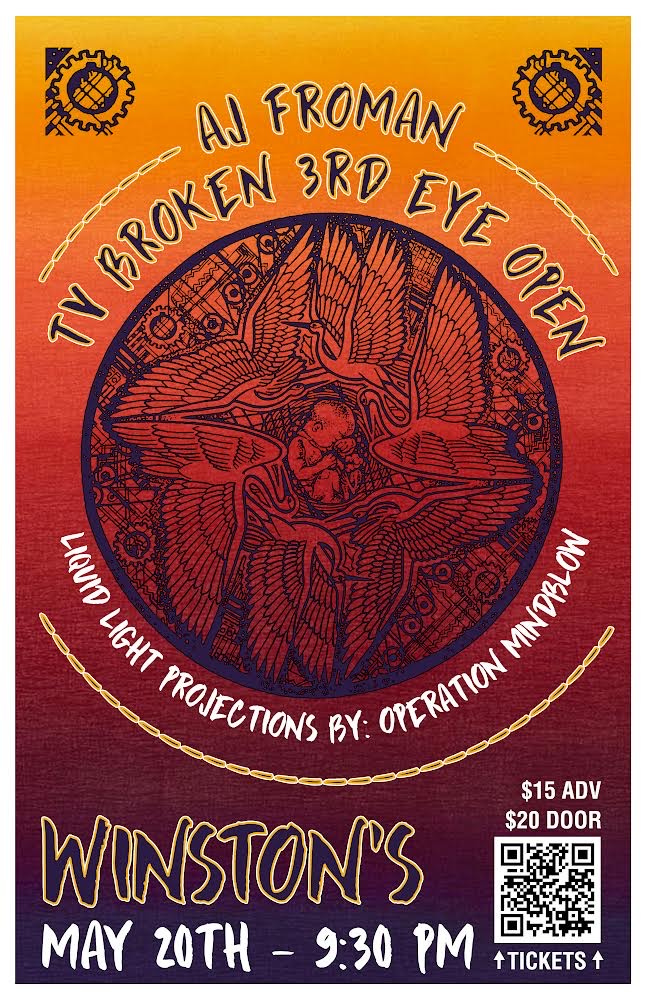 AJ Froman originally started as a recording project between Albert Bowman and John Joyce. Two musicians from the east coast living in San Diego who came together with similar musical interests. After recording a 7-song EP with the help of Jeff Shaefer, the three began an latin, experimental, progressive rock project. After cycling through a variety of musicians, the band currently consists of Sarah Norwood, William Hart, Albert Bowman, Jeff Shaefer, and John Joyce.

Since then, the full band has released a 5-song EP entitled ‘Nocturno EP’ as well as a full length album entitled ‘Phoenix Syndrome’. With influences ranging from latin, psychedelic, progressive, experimental, and blues, as well as being accompanied by live artist, Jimmy Ovadia, the group does a fine job taking you on a musical journey through harmonized melodies and syncopated rhythms.

TV Broken 3rd Eye Open is an eclectic and versatile seven-piece band that fuses together a multitude of musical styles from across the world into a psychedelic explosion of sound. Equipped with didgeridoos, sitars, guitars, world percussion, keys, synthesizers,  drums, bass, flutes, harmonicas, banjos, and the kitchen sink; it is a musical ensemble like no other. The band draws inspiration from a myriad of musical genres such as afro funk, jazz, psychedelic groove, Indian, folk, blues, and even spaghetti western circus cabaret. Though the band’s sound is unique in its own right, the TV Broken 3rd Eye Open experience also has a significant visual component. The TV Towers 2.0 (debuting in April 2019) is a way to express the way the band sees their music through visual art. Stunning visuals of sacred geometry and psychedelic imagery are then projected on to the stage to combine with the music to make for a truly unique experience.

Grooving and playing with so many different styles and sound textures has allowed the band to continuously grow from a style perspective. Just as their music has grown, so too has their festival presence. Having played at festivals such as Electric Forrest, Symbiosis, Lightning in a Bottle and Lucidity; TV Broken 3rd Eye Open’s exposure is on the rise. The band’s recent collaboration with visual prodigy  Pickles Visuals and Stranger Liquids has certainly solidified TV Broken 3rd Eye Open’s status as a must-see band on any festival line-up.